They are a member of SkyTeam Airline Alliance and fly almost 150 destinations in 44 countries. Currently, the airline is run by Walter Cho, He is the CEO of the Korean Air.

After being one of the founding members of SkyTeam, Korean Airlines gives extensive packages and offers to passengers after being part of such a big alliance. The alliance makes a profit for Korean Airlines too.

After flying over more than 44 countries, Korean Airlines lands at numerous destinations with exclusive offers for passengers. They stand out from every other airliner from South Korea and maintain the position of the largest airline in Korea.

Korean Airline booking in the class of services

Korean Airlines has come up with its new economy class. with new 17.2 – 18.2 inch wide seats with comfortable sliding cushion. The seat has the capability to recline 118 degrees, with good back support and better comfort.

For Entertainment onboard passengers can enjoy their favorite shows on board with a 10.6 inch HD LCD screen. with a great audio system. In B747 you will see 11.1 TV screens. You will find USB ports o to charge your appliance and enjoy your time relaxing on board

Korean Airlines have dedicated counters for business class passengers. Passengers can excess expensive bars and lounges with no extra chargers and feel and live the luxury with Korean Air. You’ll find all things on board like port to charge, amenity kits, and more. For in-flight entertainment, you will have a High tech AVOD system.

The seats are 180 degrees reclinable and you will have at least 75 inches of space between the rows to stretch out fully.

Korean Air has a variety of seats for first-class passengers and all of them have different facilities and benefits for you. but the comfort you will get is at the top of the world. They will never let you down and you will have the best out of Korean air.

They have dedicated lounges for first-class passengers in Seoul.

Korean Airlines have a wide range of tv shows and cartoons and documentaries on their TV screens provided in all classes. They have a very decent in-flight entertainment system which will keep you engaged with your whole flight. There’s no onboard wi-fi as such but pre-download movies and shows are available.

Have the exotic meals flying onboard exclusives made for you under the care of a well-renowned chef. You will have a personalized menu on board. Passengers can have dedicated Korean cuisine, it has a starter main course, side dishes, and dessert.

You will mainly have typical Asian dishes onboard, like Japanese, Korean or Chinese food. they have special meals options to with alose include vegan

Korean airlines give the benefit to their loyal flyers with Skypass membership. The Skypass is majorly divided into two parts

A million miller is the highest recognized pass, with a lifetime mile collecting policy. One can Fly with Korean and collect their miles for Emirates too. Emirates have SkyWards as their mile program.

Korean Airlines takes more flights from American cities to Asian cities than any other place. 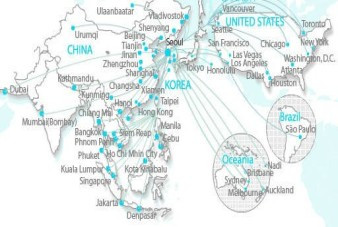 1. How will I receive my ticket which I book online? +

When you book your ticket online, you will receive an e-ticket which is sent to your email address which you provide during the booking process.

2. Can I book a ticket for someone else on the official website? +

Yes, you can surely make a booking for someone else on the official website. You need to ensure that the details of the traveler are filled accurately.