Koninklijke Luchtvaart Maatschappij aka KLM airlines is one of the world’s oldest airlines after completing It is the Flag Carrier of the Netherlands and a member of SkyTeam Airline Alliance. KLM completed its 100th year on 7th October 2019. It was founded by Albert Plesman. KLM has its hub at Amsterdam Airport Schiphol.

After flying for 100 years KLM has 116 aircraft in its fleet while flying for 145 destinations. The airline is run by the President and CEO Pieter Elbers employing 35,410 staff under his supervision.

As the Alliance, KLM is the part of SkyTeam Alliance and SkyTeam Cargo. This benefits the airline as well as the passengers in many aspects. Passengers can experience different airlines’ class of service under the Alliance policy benefits.

All around the globe, KLM has many Codeshare partners which benefit the passengers to collect some goodies and save their money on many small things. They can enjoy a free flight too from such policies. Listed below are code partners

By flying five continents, 70 countries and 145 destinations KLM is the lion of skies. After partnering with so many airlines KLM had almost covered the globe and still, they are expanding and adding new destinations in their list. Listed below are international destinations covered by KLM.

KLM has one main hub at Amsterdam Airport Schiphol and headquarters nearby at Amstelveen.

KLM Airline booking in the Class of Services

Passengers get decent comfort and legroom space at the cheapest fare. The seats of economy class are extra reclinable. In terms of the meal, they are divided into two-part short-haul and long, mid-haul.

Passengers can get snacks, beverages, and sandwiches on short-haul flights. For the long haul, they can order any drinks and special dietary meals as per their wish. They have multiple menus to choose from.

They have magazines and books to read on board to pass their time during the flight.

Business-class seats are the most comfortable seats on KLM flights. They are 180 degrees reclinable and 207 cm long. Passengers can get the best out of KLM from business class. They can get top-notch comfort next-generation AVOD system on board to keep your flight entertaining

Some flights of the business class have sleeper seats except beds, they provide sockets beneath your seats so you can charge your gadgets.

KLM has the most luxurious and premium class options as a Business class. They do have first class.

KLM serves an exclusive package of entertainment, passengers can experience non-stop 1000 hours of entertainment, with 200 + movies shows, series, and more on your persona;l television. For kids on board, they have dedicated channels and shows to engage them. For gamers, they have a variety of options.

To connect you with the world during your flight they have Wi-Fi onboard on all aircraft. You can use it on any of your wifi connected devices.

Economy Class passengers can enjoy the drinks as many as they want to drink whether it is alcoholic or non-alcoholic all of them are free. For the meal, they have a personalized A la carte menu and a specific menu for Asians.

In Business class they have the best meal option among the best airlines, they serve anytime dining whenever you want you can dine. Beverages and snacks are free, passengers can get on-demand dishes but on particular routes.

The frequent flyer program of KLM is called Flying Blue. Their Flying Blue is all about miles. Loyal passengers can gain points with each travel and redeem them on anything they like.

There are three stages of membership:

Each stage has its own benefits and they keep getting better as you keep upgrading yourself.

Under this program, the Flying Blue travelers can also earn XP. These are points for experience. One can earn XP and keep upgrading itself for better benefits. The best part is you can enroll yourself for the program for free. 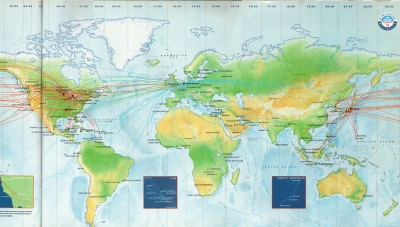 Yes, you can track your flight updates through the mobile app or official website. Tracking flights is possible even before you start the journey.

2. What are the payment methods?

KLM offers you a variety of payment options and ensures that your payment process is done safely. You can pay via credit card or debit card, bank transfer, and more options depending on your country.