the flag carrier of Iceland and operating for decades. Icelandair covers a total 16 countries and flies over 34 operating aircraft. Icelandair is not part of any alliance groups nor do they had codeshare partners.

The company is growing under the guidance of CEO Bogi Nils Bogason. In total 1,387 employees work in Icelandair.

Icelandair is said to be stand-alone airlines as they don’t have any alliance. They have very limited code partners too. They firstly didn't have any codeshare partners but in recent years they have some partners.

Icelandair flies over numerous destinations and covers the globe with their decent fleet. The airline flies for 34 destinations with 29 aircraft. Listed below are the destinations of Icelandair Flights.

Economy passengers are offered various complimentary drinks that are composed of soft drinks and not alcoholic drinks, they also have an entertainment system individually where they can enjoy flicks.

One can always buy onboard meals if they need. And furthermore, they need to pay for Wi-Fi or they require it.

This economy class consists of 161 seats.

Currently, the airline doesn't possess this cabin in their flight.

The seats in this particular class are organized in sets of couples. Where one is located towards the window side and the other one is situated on an aisle side.

Business class tickets can be further promoted to a saga premium flex. There are some additional facilities in this specific class such as it can be booked again easily and complete refund to the passengers.

Currently, the airline doesn't possess this cabin in their flight.

The airline offers nearly 50,000 minutes of onboard entertainment. It ranges from the latest releases to music based in Iceland. All this will surely assist you in sustaining throughout the flight. You will find various sitcoms, English drama, TV shows from Iceland.

For those who are not offered an inflight meal in their fare can preorder the same before the commencement of their flight. For a special meal, one can contact the airline to order the same.Passengers can pre-order drinks before the flight is commenced.

Icelandair's frequent flyer program is known as "Saga club".The members of saga club can use their saga points with Icelandair flights and partners around the world. The members can use saga points to book flight, hotels, rent a car and for onboard purchase.

The member can purchase more legroom onboard with saga points. The members can enjoy more benefits as they upgrade their saga card to  saga silver and  saga gold. 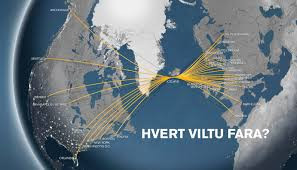 Yes you can fly with your pet given that you meet all the terms and conditions.

Yes you can bring a baby bassinet on board.

3. Children from what age can fly alone? +

Children from the age of five to eleven can travel alone with our assistance.