LATAM Airlines Colombia was previously known by LAN Colombia, and before as Aerovías de Integración Regional S.A(AIRES).It is a Colombian airline and the second-largest carrier in the country. On February 20, 1981, it was found and started its operation with only a few aircraft.During 2004, the airline made 1,000 million pesos cost of investment. After that, the company transformed and changed its image with stationary.In 2009, the airline began with trunk routes, that was the new era where they were standing out with Avianca and Copa Airlines Colombia. And, later it was done as they were incorporating Jet aircraft and with tariff scheme by providing low-cost flights.

The airline terminated many international destinations in Brazil, Aruba, Mexico, Peru, and the United States. Its main hub airport is based at El Dorado International Airport in Bogotá.

LATAM Colombia airline offers an economy class in all their flights, as a standard option. The airline economy class seats come with decent legroom and reclinable

The food menu facilities are available is on long and short-haul flights. There is also the option of inflight entertainment like a backseat screen while long trip flight.

Premium economy seats of LATAM airline comes without a middle seat for extra legroom space.It is available only on Airbus A319 and Airbus A320 exclusively with a separate cabin for more privacy.

LATAM airline business class seats come with 23 inches wide, 76 inches in flat length. This class passengers can access to aisle directly due to 1x2x1 seat orientation. Moreover, the business class cabin seats are fully lie-bed and come with a touchpad adjustment system. If passengers desire total privacy then, they will get a personal shutter.

You will get inflight entertainment like 15.4 inches of personal screen with lounge access as well.You will also get a food menu, where you can place orders and get hot meals. And also, get some complimentary snacks and alcoholic/non-alcoholic drinks.

The online web check-in time began 48 hours before your scheduled flight departure. You can do an online check-in of your baggage until 75 minutes before departure. And, you also have option to do LATAM Colombia mobile check-in. With the help of this, you can print out or display your boarding pass.

For domestic flights, the check-in time is before 60 minutes and for international flights, it is before 75 minutes. If you're just traveling with carry-on baggage, then it will no time doing check-in at the airport. 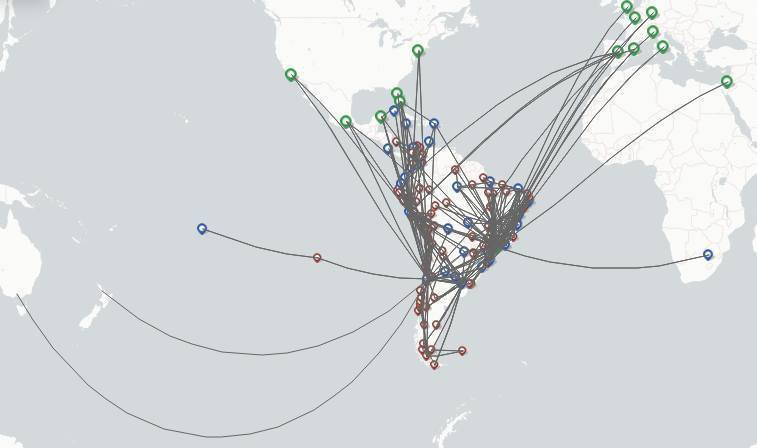