As per the recent data, the airline serves a total of 114 aircraft. Air New Zealand has a fleet size of Airbus A320neo family, Airbus A320, Boeing 777, and Boeing 787 jet aircraft and other regional aircraft like Atr 72 and Bombardier Q300 turboprop in its fleet size. Moreover, in 2014, Air New Zealand was ranked as the safest airline in the world by JACDEC.

Air New Zealand's primary hub airport is Auckland Airport. The other two are Christchurch and Wellington with Los Angeles and Sydney as its focus cities.

Air New Zealand has the economy class for long hauls on Boeing 787-9, 777-300, and 777-200. The airline makes sure you get every type of comfort and in-flight entertainment onboard. economy class seats come up with an ergonomic design that will give you great relaxing seats and space. You can do economy seat selection easily and get 17.2" wide with 31-33" of pitch and also 5" recline. However, the airline economy class seat dimension will vary as per the different types of aircraft you will in. Air New Zealand will also keep your kids engaging onboard through their in-flight entertainment that has many kid friendly stuff in build.

Air New Zealand has an upgraded version of its economy class as economy Skycouch. The Skycouch is a kind of private seats(5ft 1" long) for you or group travel giving a window end armrest. It also has great leg space with a cushion and it is 29"(74cm) in wide. Air New Zealand Economy Skycouch seats are present in all 777 and 787-9 aircraft.

Air New Zealand's Premium economy is exclusively available in their Boeing 777-200, 777-300, and 787-9 these aircraft operate long-hauls. Just like the name, you will get premium ink-colored comfortable leather seats that are very soft and will give a home touch presence. Air New Zealand premium economy seats are f 41" in pitch, 19.3" in width with 5" wide armrest, and also 50% more recline(9") than its economy class. Selecting seats and making flight reservation in their Boeing 787-9 Dreamliner will provide complimentary drinks and meal, also you will get free carry-on and checked bags on premium economy.

If you desire luxury, then Air New Zealand's business premier is for you. The airline business class seats have super comfortable and soft and you can enjoy the longest lie-flat bed while flying. You can do the business premier class reservation in their 777-200 and 300, as it comes up with excellent quality leather armchair of 22" in wide and later on it can be converted into 6'7.5" of long bed. You will get a personal traveling kit, complimentary food, and drinks, free carry-on, and checked baggage and privacy at its best.

Unfortunately, Air New Zealand does not offer first-class onboard. But, their business premier and premium economy class are very much for you if desire private luxury in the sky.

Air New Zealand in-flight entertainment comes up with a touchscreen pad that is very much similar to your smartphone or any app while using. It has the latest context in TV shows, box set series, new singles, and also multi-player games for your kids. Moreover, their inflight food menu has a great variety of meals, snacks, and drinks options, and also you can pre-order the special meal as per your desire. In the premium class and business class, you will get complimentary food and drinks. While talking about the free carry-on and checked bags, you will get 1 or 2 pieces of bags as per your class fare type. However, if you buy flight tickets in the business premier class, then you can access their private lounge, get priority boarding with premium check-in, and also private quality in-flight services.

See Route Map in Below Image 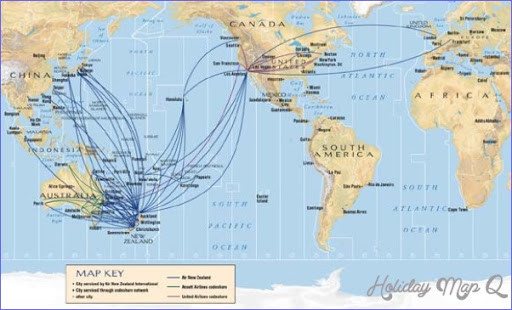 Yes, while traveling on Air New Zealand, you will receive good complimentary options and free tea, coffee, and drinks on board.

3. How old do you have to be to fly alone Air New Zealand? +

Your child age of under 12 can travel if he/she is traveling without an accompained person age of 15 years or above. For instance, a 13 year old child cannot travel with an infant.

You can check the flight status by Air New Zealand mobile app. You can only check flight status before 48 hours of your scheduled flight departure or arrival.