The Air Europa was founded 35 years ago in 1986 by Juan José Hidalgo. The airline was previously known as Air España SA and is registered in Spain with the same name. Now it is fully owned by a travel and tourism company Globalia Corporación Empresarial, SA. It was previously started as part of the British ILG-Air Europe Group and 75% owned by Spanish banks. Its main business was charter flights and when it started to operate national scheduled flights it became the first Spanish company to do so. Using Boeing 737-300s and Boeing 757s, it started its flights to European cities from Mediterranean resorts on holidays.

You should know that its main hub at Adolfo Suárez Madrid-Barajas Airport with Palma de Mallorca Airport and Tenerife North Airport as secondary focuses and the main headquarters of the airline is in Llucmajor, Mallorca, Spain. Being the third largest airline in Spain it flies 44 destinations in Europe, Morocco, North America, the Caribbean, South America, and Tunisia.

Air Europa became a member of SkyTeam Alliance in 2007. Founded in the 2000s the SkyTeam alliance is one of the three major airline alliances.

Air Europa has a codeshare agreement with the following airlines:

The following table shows the latest number of aircraft in the company.

The airline has 44 destinations all over Europe and the Americas. It's your services are operated between northern and western Europe and holiday resorts in the Canary Islands and the Balearic Islands.

The following domestic destination is reached by airline:

Air Europa booking in the class of services

The airlines provide 2 travel classes along with various excellent facilities. Both classes are provided with excellent seating facilities and In-flight entertainment and food menu.

Business-class is provided with separate cabins and convertible seats. Long-haul flights have a few more perks than short-time fights. The perks include a food menu and entertainment facilities like films and TV Series.

The Economy class is the most affordable travel class offered by the airline. The Economy travel class provides a 31-inch inch seat pitch. The seats are cushioned and have leather headrests with adjustable wings. The class is also provided with onboard entertaining items such as newspapers, magazines, films, TV series, and music. The class offers paid meals. The professionally trained cabin crew of Air Europa is always there to make your flight comfortable.

The onboard entertainment of business class is provided with newspapers, magazines, films and TV series, and music. Paid Wi-Fi is also provided. The crew trained especially to make your journey easy, comfortable and enjoyable are always available.

The flight is provided with an exciting menu. The airline offers dishes with a Spanish touch. Several Beverages are served on the flight.

The airline uses a streaming service on the entire B737-800 fleet and the E-195 fleet. The system enables passengers to enjoy a wide range of entertainment free of charge. The flight also offers a wide range of national/international newspapers and quite an impressive range of magazines

Short flights offer content trained for the flights while long flights are provided with movies, series, and documentaries.

The Air Europa offers a wide range of meals and beverages. Meals include snacks, alcoholic as well as nonalcoholic drinks, cold drinks. The menu depends on the length of flights. However, long-haul flights are offered two meals with complimentary wine and beer selections. You can also place orders for exclusive meals. The airline also accepts online orders to save time for passengers and make journeys more comfortable and exciting.

By booking your flights with SUMA Miles the frequent flyer of Air Europa you can redeem different vouchers by using their miles. The points can be used to get excess of different paid services and even purchasing flights. The points can also be used to enjoy services in different partner airlines of the frequent flyer. It enables the use of airport lounge facilities and other privileges. 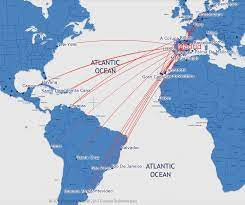 1. Can I reschedule my flight after booking the tickets?

Yes, rescheduling your flight after the booking is possible. However, you can reschedule by visiting the website page. Go to the website of Air Europa and click on the "manage my booking" Section and proceed. If for any reason you are unable to do it yourself, you can also reach or contact customer services. Moreover, using customer services would enable you to check the booking details and provide you with the knowledge to reschedule the flight even after booking the tickets.

2. Can I extend my voucher validity?

The voucher must be redeemed in the given specific period. The airline also has no control over overextending its validity. Once the voucher expires you cannot claim it back.

3. How can I check my flight status if I book Air Europa airlines flights?