Air China is a Chinese Airline. It is based in the Shunyi District of Beijing. The airline is 32 years old, that is it had begun its operation on the 1st day of July in 1988. The functions of the airline are principally based at Beijing Capital International Airport.  It is the flag carrier of China.

The airline was the result of the Chinese Government’s conclusion to divide the operation of the Civil Aviation Administration of China into six different airlines. Subsequent to 32 years of soaring in the skies, Air China has managed to acquire 435 aircraft in its fleet. The airline operates under the supervision of the President and CEO Cai Jianjiang. The airline employs  50,000 staff under his administration.

Air China is a member of Star Alliance. It became part of the Star Alliance in 2007. The airline codeshares with several different airlines which has many pros for the passengers in many aspects. The following are the codeshare partners of Air China:

With 435 aircraft in its fleet, Air China is one of those airlines that operates across six continents. It flies to around 127 domestic destinations and 73 international destinations in around 43 countries. Moreover, the airline is still expanding its fleet as well as annexing several destinations.

Air China operates to very exciting destinations. Additionally, it is expanding its operation to more destinations. Presently operated international destinations include the following:

Air China booking in the Class of services

Passengers are provided with very comfortable seats so as to make you relaxed as well as plentiful legroom. The seats are acquired with an in-seat display for entertainment and a very pleasing cabin environment.

Feels the better comfort and a bit of Luxury at cheaper rates with Air China, passengers will have amenity kits on long haul flights. The Re-designed  Class has provided more space and legroom to stretch yourself.

Passengers are provided with complete flatbeds. These seats provide more privacy than the standard ones. The Legroom is more than sufficient in this class. In-flight entertainment systems are also provided, such as a monitor on the seat.

Passengers are also provided with an amenity kit and slippers. The configuration of the business class is 2-2-2.

The first-class cabin of Air China comprises 12 seats with a configuration of  1-2-1. The seats in the first-class aren’t fully contained but semi-private. The beds are extremely comfortable. The in-flight entertainment systems are astonishing. However, there is no Wi-Fi on board the aircraft.

You won’t get bored during the flight. Air China has taken care of it. They have provided an AVOD system that displays many movies of different genres, and hundreds of music, and a varied selection of games, that will help you to keep yourself entertained throughout the flight.

Passengers are provided with an incredible meal. The meals are very healthy and are a combination of both Chinese and Western food. The menus are changed every month in order to bring a diverse variety of meals for their passengers.

Phoenix Miles is the official flyers’ reward program. This program helps their passengers to earn points in various ways including flying with them and with its codeshare partner, by booking hotel rooms, and even by renting a car.

These points can be redeemed for a free flight, cabin upgrade, hotel reservations, and even while renting a car. 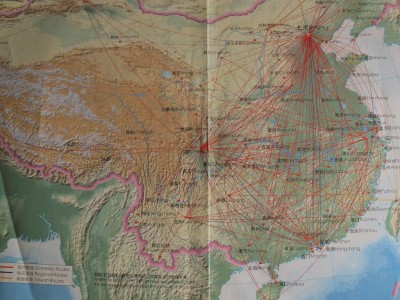 1. How will I be informed about any schedule changes in the flight? +

The airline will inform you about any schedule changes or cancellations in your flight as soon as possible on the contact details that you provide during the reservation.

Yes, if your reservation is done through the official website you can surely make the desired changes online.